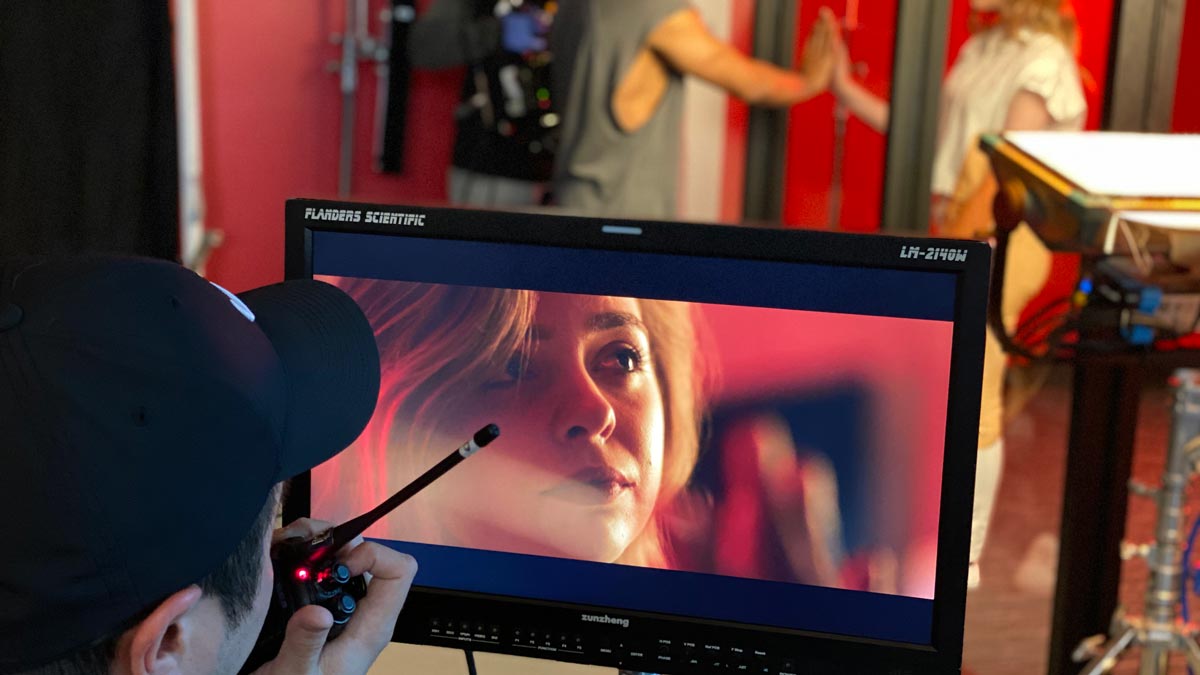 Estranged son is able to restore a broken relationship with his father right before he dies of COVID19.  His father was quarantined which forced their only contact to be through a pane of glass.

This story and many like it are emerging during this world pandemic.  Hearing these stories inspired Director Matthew P Rojas. He felt a need to capture what he was feeling.  After some writing and very creative production a story emerged.  One that examines multiple real life quarantine stories with a sci-fi twist.  We asked the Director, an actor, and the Executive Producer Joe Young about the piece and how they approached production during a world Pandemic.

Q.) The Hot question is how did you approach production in the mist of COVID crisis?

Joe: We knew we had to adhere to the CDC guidelines and create a safe, comfortable production set for the super small crew and talent. We kept our crew size to 4 people total and asked them to perform multiple roles.  The team had the perfect location.  We used  our Nametag office, it was clean, and no one would be there.  Then we leveraged live streaming feed from the cameras allowing additional collaborators to provide real-time feedback from the comfort of their home. Shinyboard equipment rentals came through with the perfect sterilized G&E package. Lastly, the actors did all their make-up and selected their wardrobe before coming to set.   To help keep the number of people low our team staggered the actor’s arrival times so there wouldn't be any overlap.

Q): How did you see Matthew's film could contribute to that vision?

Joe: Nametag films is proud to have Matthew Rojas on the director roster.   One of the things I love is how much he empathized with the people affected by this pandemic.  Matthew’s natural inclination is to serve others.  This film was created to showcase the human connection.  Tell the story of those that are facing unimaginable life events.  Matthews film was created out of a want and need to help people.  By putting the need of others first Matthew wanted to tell a story that offered love and hope even in the darkest of hours.  A story that is unfortunately all too real during this time in history.

Q): What do you appreciate about Matthew's awareness of what issues are relevant to audiences?

Joe: We appreciate Matthew’s passion to pursue an opportunity to tell a story for the unheard voices.

Q.) Where did the idea for writing Indivisible come from?‍

Matthew: I was inspired by a story I read, where a Father contracted the virus, his son found out about it and hung out with him in his final days literally outside his Father’s hospital bed (A window separating them). Their relationship was rocky their whole life but that situation brought them closer. The dad ended up dying but the son said, "After a while, we got over our barriers (Both literally and metaphorically) and became closer. Regardless of the situation, I couldn't have been more thankful" This piece plays more in the sci-fi genre but what makes good a sci-fi? Relatable moments and human experiences. So we were trying to capture a universal feeling of people getting closer in times of separation.

Q.) Any influences come to mind you were inspired by, feel it's worth mentioning?‍

Matthew: Darren Aronofsky’s The Fountain and Tarkovsky’s’ Solaris were some of the biggest inspirations for the film in terms of the idea and the relationships established in the film.I know we wanted to play with lighting fixtures and have colors complement one another in each scene so we referred a lot to the neon works of Tracey Emin and the photography of Robby Müller.‍

Q.) What challenges did you work through to create it?‍

‍
Matthew: The most challenging part was trying to make this and put it out there before it looses relevance. So from the beginning we felt that we were racing against the clock. Finding cast and crew was also an obstacle in itself due to the concerns of COVID-19 (We didn’t blame them). As far as production, safety was our ultimate concern and maintaining protocol. (Keeping less than 10 people in a room, 6ft apart, etc..). After a while people were at ease and just grateful to create. I communicated a lot through walkie-talkies with my cast and crew.

Q.) What is your hope for the film? How do you hope it will affect a viewer?‍

Matthew: People have found themselves separated from friends, family and those dearest to them. So how can we be emotionally close, yet physically distant? How can we love each other well when actions speak louder than words? The world is having to figure out what love looks like during the time of the COVID-19. Many believe that the separation will be a way of bringing us closer together — much, much closer.My hope is that this film is a symbolic message to that.

Q.) What's a detail in the film that's got you excited to create and share?

Matthew: The ending which people will not expect.

Q.) What was challenging about the shoot?

Major: For me the most challenging thing was accepting the work during this crazy time. I’ve actually done 3 jobs now during this quarantine and I’ve struggled each time with guilt over it because I know most of my fellow actors have not been as fortunate or may not even want to take the risk. But at the end of the day I have to work. I just made sure to take proper precautions each time.

Q.) What was rewarding about the experience?

Major: The most rewarding thing about this job was getting to work with such an experienced team of professionals. I’ve worked with Nametag Films before so I knew it was gonna be a well oiled machine when I showed up on set. Also, I knew going in that I was working opposite Kenneisha Thompson and she’s always a joy to work with as well. A huge talent!

Q.) How'd you feel about working in these special circumstances?‍

Major:The theme of this project really spoke to me as an artist as well. This was my first job to do after being quarantined for almost a month. So it made it easy to access the necessary emotions required for my scenes. FaceTiming and Zooming and doing church online has been nice to have. But nothing will ever take the place of in person interaction. I can’t wait to hug all the people I love after this ends. And I can’t wait to worship God with a live band again.

The Future of Commercial Production?