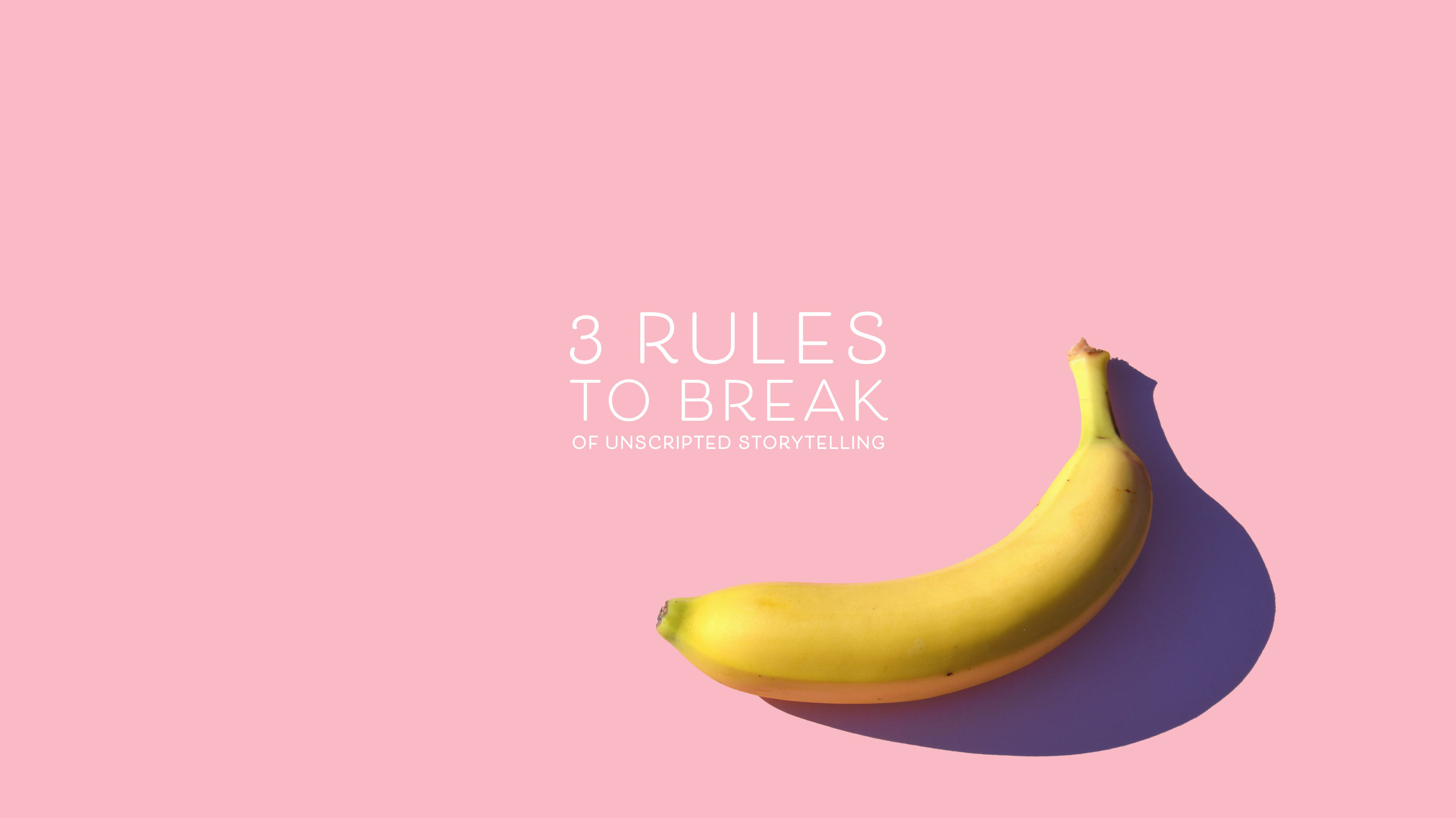 First I loved learning the tricks of documentary storytelling.  For directing, editing, and just holding an audience’s attention.  Loved all it.

Then I had this thought.

How will I inspire a new reaction from audiences - by relying only on the widely-used techniques seen time and time again?  If I say we’re making an innovative story - shouldn’t I employ innovative techniques to the process?

So I looked at all the rules I follow of storytelling, and chose precisely the right ones to break.  Here are three.

When interviewing guests, cover a range of storylines.

For a director this is called covering yourself, playing it safe.

I’m not sure how this works…  but spots that I’ve done while playing it safe seem to land with a just “okay” reaction with audiences.  Yet spots with more risk seem to leave people energized.  It’s almost like the ambition of the filmmakers gets imprinted into the performances for audiences to feel.

While on the set, I try to avoid the sedating lull of playing it safe.

Plus, statistically this is highly inefficient.

If I cover five different storylines during an interview and only one makes the edit, I’m wasting 4/5’s of the time with my guest.  That’s 48 minutes of a 60 minute interview that gets deleted, forever.  Like forever ever.

Instead, I ask for an hour long pre-interview call several days or weeks before the interview.  For the first 40 minutes, the guest and I can explore potential storylines. Then for the remainder of the call, I invite them to brainstorm with me on which areas feel right to narrow in on.  We don’t have to solidify a plan right then, but we do usually walk away with a sense of where this is going.

For the day of the interview, I’m then able to direct the guest on where our parameters are.  This is our target.  This is out of bounds.  It’s exhausting to share a life story in front of camera.  So directing with intentionality allows my guest to focus their thoughts, live in them more deeply.

When filming subjects, tell them to “just be themselves”.

Um, this is probably the dumbest thing I’ve ever told someone.  Think about it.

A guest rearranges their schedule to be here.  Maybe opens up their home to a film crew.  Has lights set up around them.  Sees cables running across their floor.  Sees tape placed on their floor.  Wonders where the sofa went.  Has a big camera pointing right at them.  Notices people staring at monitors of the camera that’s pointed right at them.  Sees whispered conversations off to the sides.  Questions what are they talking about.  Do I look bad?  What am I doing here?  Why did I agree to do this?  Oh, here comes the director.  Please say something comforting.  Inspire me with your wisdom Mr. Filmguy.  And then he nonchalantly says to pretend none of this exists?  Impossible!

Instead of telling a guest to ignore what’s happening and be in their own world - with their nervous thoughts - I invite them into mine.  Join me.  Become a fellow collaborator.

So as I prepare a guest for each scene, I’ll quickly cover -

_  what I’m looking for in this moment

_  if they have any suggestions to make it better

Before rolling I then ask - now that they see the bigger picture - they be present emotionally, mentally, spiritually in what is happening right at that moment.

And you know what?  I find it works.  And often times it works powerfully.

Perhaps a comfort in knowing where we’re heading brings a comfort with each little step to get there.

When filming b-roll, be a fly on the wall.

Oftentimes in unscripted or documentary filmmaking, we need to capture visuals seen countlessly before.  An athlete training. A teacher teaching . A doctor doctoring.

Earlier in my career I’d take an hour designated for b-roll, ask the subject to do whatever is natural, and film them from as many different camera angles as possible.  Basically I let them drive the action.  And though the power of editing, we’ll pack in lots of fast edits to cool music and make the mundane become magical.

So I changed.  I made it my job to bring the special.

I now walk into b-roll scenes with three things in hand.

_  a loose storyboard of a hypothetical scene - for direction

_  a reference photo or video - for inspiration

After a quick conversation with my cinematographer, I make a quick storyboard for a specific scene or two.  Could be a drawing, a written description, or even a verbal listing. Then I film b-roll scenes with just those 1 to 3 camera setups, and usually 1 to 3 takes each.

Yes - if the director creates an atmosphere that is unsure and awkward.

No - if you learn how to put people at ease.

“Staged” b-roll doesn’t have to be a bad thing.  I like to call it “designed” b-roll.  The benefits are I can place the camera in the spot that best sets up the story.  And guide subjects to live out a moment that propels the story forward.

To encourage a sense of spontaneity, I ask guests to have true-to-life conversations while we film - even if we’re not recording audio.  If they talk nonsense, it’ll feel like there’s no weight to their conversation.

Before I cut the camera, I have my cinematographer “find the action”.  Film while walking up to the scene, then walk in for unrehearsed camera movement and actions.

This allows me to create a genuine moment within a crafted environment.

The stuff of a great story never changes.  But the way you create it can.

Perhaps something here is a little encouragement for filmmakers to find their own set of rules to follow.  And, when the time is right… to break.